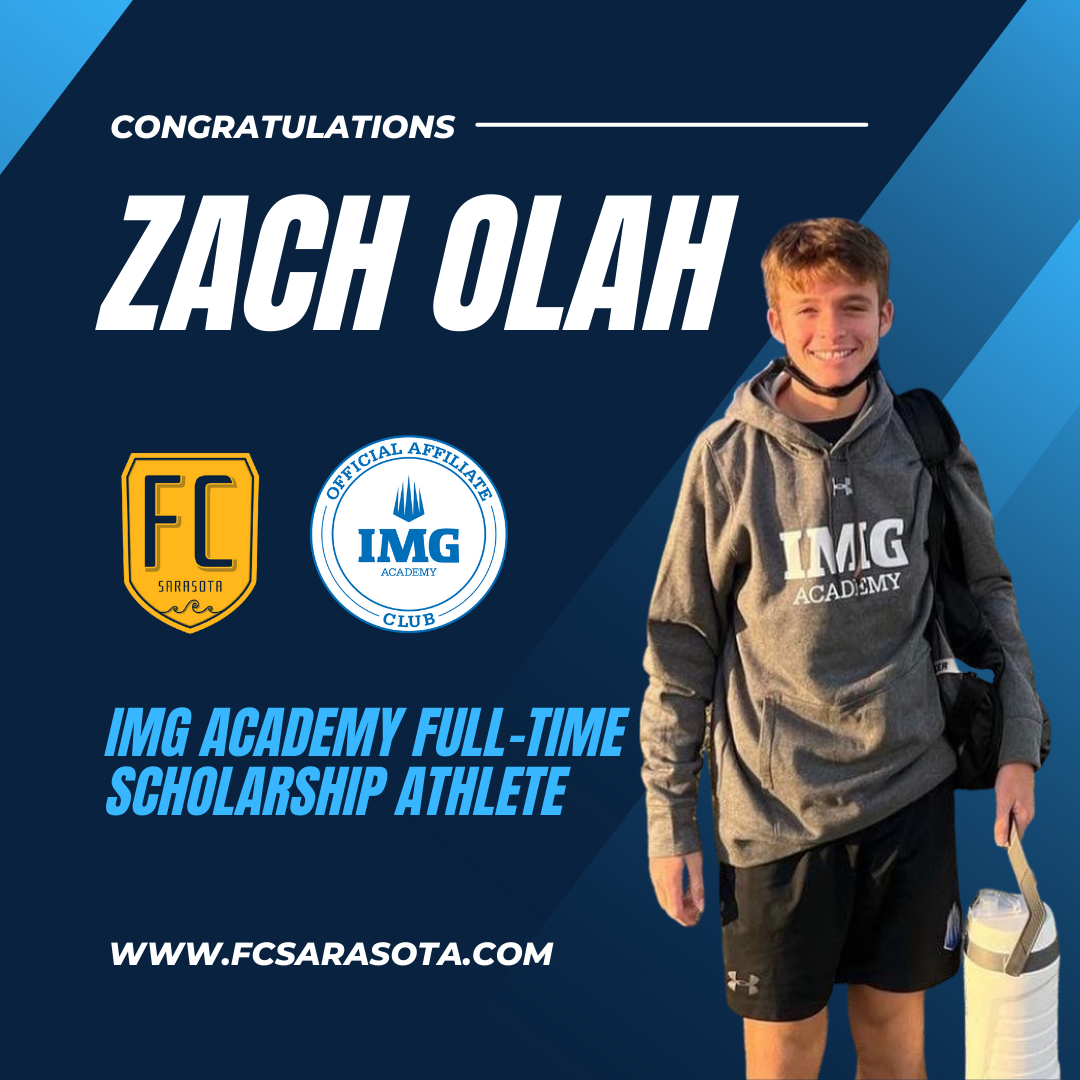 We are proud to announce that Zach Olah was awarded a scholarship to attend IMG Academy as a full-time student athlete. This tremendous opportunity was provided through FC Sarasota’s club affiliation with IMG and Zach’s standout performances in the  MLS NEXT league (highest league in the US) and Sunshine conference Academy.   Zach started at FC Sarasota in 2013 as a First Kicker and followed the club’s player pathway through the Recreational Program and into the Competitive Program.

Director of Coaching Kyle Lessig explains “This is a testament to the vitality of the Affiliate Program we added this year to FC programming.  We have produced an elite talent in the State of Florida and we wish him the best of luck in the next level of his young soccer career”.  FC Sarasota will continue to develop players in a player centric model with a clear pathway to the highest level in both boys and girls soccer. Good Luck Zach!

“Over the past two years Zach has been an absolute joy to work with.  It is beyond clear that he is a top talent but what sets him apart is the attitude and mentality he brings to training on a daily basis.  I am so proud of him and can’t wait to see what’s next for Zach Olah!”

“Since Zach’s introduction to soccer in the first kickers program at age 3, we have enjoyed being part of the FC Sarasota family.  All of the coaches and staff through the years have assisted in his development to allow him to be named to the FYSA ODP state team for Florida in 2020 and then the USYS ODP South Region team in 2021. FC Sarasota provided Zach the opportunity to train and play at IMG Academy as an affiliate player in 2021 and the pathway to enrolling at IMG Academy as a student-athlete in 2022.  While Zach pursues his next opportunity, our family continues as part of the FC Sarasota family with his sister, Ashley, currently playing for the 2007 Girls Premier team.”

“I have really enjoyed my experience at FC Sarasota.  Through the various soccer programs FC Sarasota offers, including camps, foot skills sessions, finishing sessions and elite training sessions, FC Sarasota has assisted in my development as a player and young person.  FC Sarasota provided the pathway for my introduction to IMG Academy.  Although I am continuing along my path, I value and will maintain the friendships that I have made at FC Sarasota.  Passion. Perseverance. Pride. Be FC!”

Want more information and how we work with IMG Academy? Contact us at klessig@fcsarasota.com